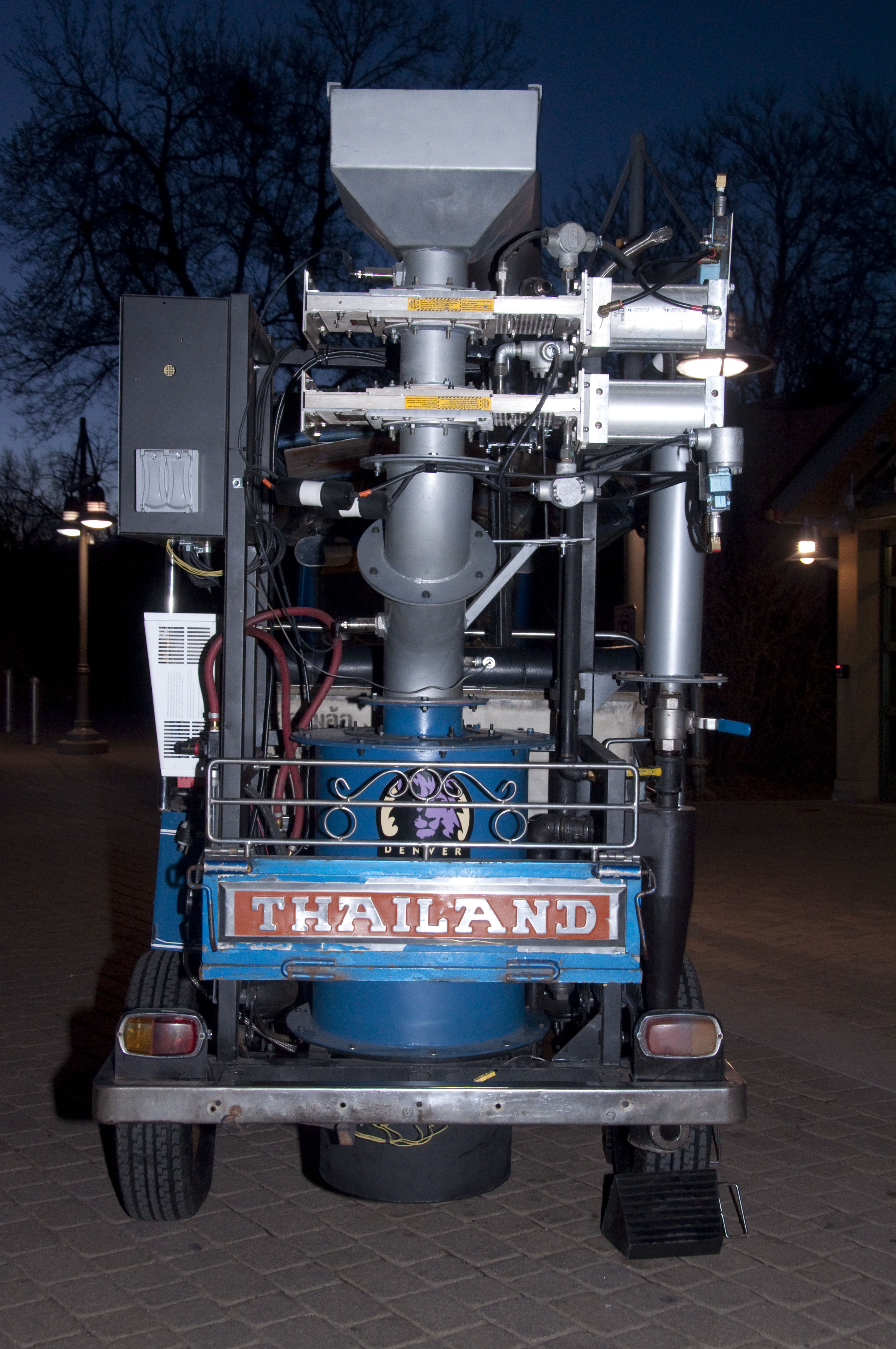 I need to give massive props to the Denver Zoo for their innovation in alternative technology based on their Tuk Tuk that I checked out this morning.  They were preparing for a tour that will wind this vehicle through the southwest to eventually present at the Green Summit portion of the Association of Zoos and Aquariums’ meeting in Palm Desert, CA next week. This vehicle is a demonstration of gassification technology the zoo pioneered to generate fuel from human refuse and animal waste.  Trash and poop people, trash and poop.  For those that know me it is obvious I love to talk about efficient ways to mindfully use our natural resources.  For those that REALLY know me I also love to talk about poop (but usually from a wellness and sanitation standpoint).

The zoo will be presenting this vehicle to the Denver public when the Toyota Elephant Passage opens 1 June.  It does not take long to connect the dots regarding which critters at the zoo create the most biomass to generate this technology – the pachyderms.  This vehicle is a demonstration of larger generators that will eventually power the zoo’s 10-acre elephant installation by the end of the year.  The machines that will power the exhibit will not be accessible to the public so the Tuk Tuk will be the ambassador to let visitors know about this technology. The zoo innovated this patent-pending technology from the workshop at NREL (National Renewable Energy Laboratory) to assess energy options and then a strong array of collaborators and supporters to push their employees to create this altered vehicle.  I spoke to one mechanical engineer on the team today who was an intern in college and eventually hired on at the zoo full-time after graduation where he was then encouraged to learn to weld to make this happen.  The zoo was fully behind this fruition. This Tuk Tuk originates from Thailand and was stripped for the zoo to play with.  The power technology is gassification which uses animal poop and human trash (plates, napkins, leftover food, etc.) that are then loaded into the top funnel to be deposited in the blue drum.  Five phalanges in that drum heat up the waste in a controlled, low-oxygen environment at 600-1000 degrees celsius where the heated material is then channeled as the fuel source.  The waste by-product is carbon monoxide.  One “load” of fuel can power the Tuk Tuk for 10 miles.  It takes 1.5 hours to heat up and about 5 hours to cool.  The drum is extremely well-insulated so that it is warm to the touch but not so much that it can burn the hand of a wayward toddler if they were to touch it.  And for those geeks out there asking… yes there is a flux capacitor on the dashboard (it does not do anything but is a nod to its famous DeLorean cousin).

Can this be applied to the “real world” outside of the zoo?  Most definitely, but do not expect to see your town powered by poop and trash anytime soon.  Part of their tour will include a stop at the Southwest Indian Polytechnic Institute to discuss applicability of this technology to communities.  The Denver Zoo expects to eventually use 90% of their waste to gassify the Toyota Elephant Exhibit.  With the diverse stream of waste products gassification utilizes this process will divert 1.5 million pounds of landfill waste away from the landfills annually. The Tour de Tuk Tuk will also stop in Colorado Springs, Albuquerque, and Phoenix zoos before arriving at the AZA Green Summit where workshops will be held for institutions to discuss sustainability issues. “Sharing our knowledge amongst accredited zoos and aquariums is critical to our continued success saving animals through environmental stewardship,” says Denver Zoo President/CEO Craig Piper.  Well done Denver Zoo, I hope people embrace how cool this little motorized rickshaw is when they see it.